‘All Saints day was exactly what its name implied, the day when every God fearing Christian gave thanks to all of the saints in heaven.’

All Saints’ Day has its origins in the early 7th century when Pope Boniface IV consecrated the Pantheon in Rome as a Christian church dedicated to Saint Mary and the Martyrs. From then until the 8th century, All Saints’ Day was celebrated on the 13th of May.

It was not until Pope Gregory IV in 835AD that the day was moved to the 1st of November and celebrated universally within the Western Church. (The Orthodox Church still celebrates on the first Sunday after Passover, which keeps closer to the original 13th May date). As mentioned in the previous post, it is thought to have been moved in an attempt to supersede the pagan festival of Samhain, traditionally celebrated the night before.

In 866, All Saints’ Day also marked the day in which the Vikings first attacked York. Whilst most sources state that this did not happen until 867 (general consensus suggests Palm Sunday in March), Simeon of Durham has the following to say…

‘… the said army of the Pagans, after having taken York, upon the calends of November [1st November], spread themselves over the whole country, and filled all with blood and grief; they destroyed the churches and the monasteries far and wide with fire and sword, leaving nothing remaining save the bare unroofed walls… Upon this occasion, however, the barbarians advanced no further north than the mouth of the river Tyne, but returned to York. Urged by this their necessity, the people of the Northumbrians collected a great army; their kings, Osbert and Ella, were reconciled with each other; and they made the attempt, to the best of their ability, to weaken the forces of their enemy. Headed by two kings and eight earls, they assaulted York, upon the 12th of the calends of April (21st March), which they stormed with considerable pertinacity, some within, some without.’ 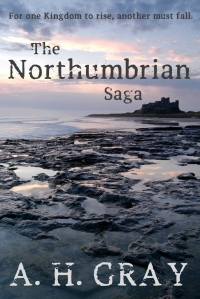 It would seem then that the Danes first attacked York in November of 866, raided and wintered in that part of Northumbria south of the Tyne, then fought off a resistance force in the spring of 867, the date which the west saxon chronicles mention. During my research into the events, this seems to make sense logically, as well as from a fictional point of view. Just as East Anglia was caught off guard earlier in the year by the Viking army, Aethelwin and the Northumbrians at York are completely taken unawares by the invaders, 1147 years ago today. To find out how she survives the invasion and the coming winter months, and who survives through the Northumbrian retaliation in March, The Northumbrian Saga is free to download until the end of the day.