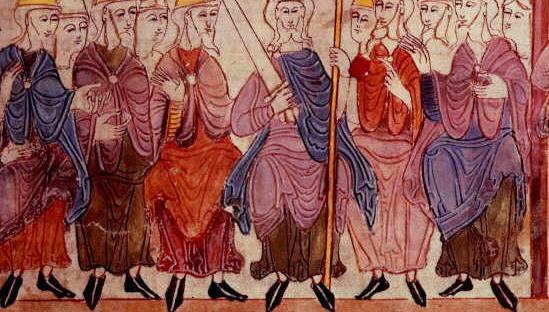 As I have touched on in a few of the earlier posts, Anglo-Saxon society was based on a hierarchy of kings and their families at the top and everyone else underneath them. So what was keeping these men (and let’s not underestimate their women either) from doing as they liked and terrorising their own people endlessly? Well in theory, that was the Witan!

The word Witan is actually a condensed version of the old English word Witenagemot, meaning a moot or meeting. It is also thought that Wite at the beginning of witen means wise men or men of wit. Therefore, the Witan was a meeting or council of wise men, formed to aid the king with good council.

Although this sounds like a very democratic organisation, it was not. As far as scholars can tell from the little written down about the mechanics of a witan, the amount of people in attendance, its regularity in meeting, and the representative nature of the kingdom’s regions and its people by this witan was highly variable. We do know that they occurred on festivals and holy days and that at these times attendance was considerable, but it also depended on where the king was at this time of the year. A Witan could be scheduled to go ahead on a certain date each year, or it could be arranged last minute. Added to this is the fact that not everyone attended every meeting. Some men (and possibly women too eg. Abbesses or royal women) would travel far to attend a witan, especially if it was an important meeting, but travelling the length and breadth of a kingdom to attend every witan was impossible. Besides, in any one kingdom there could be hundreds of aeldormen, thanes, bishops etc and if they were all expected to attend every meeting it would be extremely expensive and logistically ineffectual. A case of too many cooks spoiling the broth.

So who were these cooks? By and large the witan was made up of many different men of wealth and power throughout the kingdom. They included aeldermen, thanes, bishops and merchants, and as many of these higher offices were given to the king’s family members, they were in attendance as well. It was a partnership that the king was expected to engage with and it was the mark of a bad king who did not at least listen to his witan.

For their part, the witan had to be wise and knowledgeable. They could no more abuse their power as the king could. Towards the end of the 10th century the King of England was called Aethelred II the Unready. This king’s reign was plagued by Viking invasions much like his predecessors, however he thought that he could end their attacks by buying them off. The Vikings of course accepted the booty and left England alone, but it was only a short term fix. They soon came back, asking for more and more money each time they arrived. Aethelred was sending his kingdom broke and earned the disparaging name of the Unready and a humiliating memorial for himself through time. Many have thought that this nickname was because he was unready for rule or for the tactics of the Vikings, but in old English the term meant ‘un-raed’. It means to be ill advised, and though Aethelred isn’t exactly off the hook for being naive in his ruling, his nickname also pokes the finger at his advisors, his witan. It was their job to help the king find the proper solutions to dealing with the Vikings and instead, they let Aethelred spend thousands of pounds in subduing his enemy at the disadvantage of his people. They were as much to blame as the king.

Through this little moment in time, we can then see that the witan’s role included advising the king on matters of defence. Added to this, they also discussed royal grants of land and charters, taxation, new laws, various church matters, and foreign policy including royal marriages. Despite the king’s ability to have the last say on a matter being discussed with his witan, he could not make decisions on items of great importance without at least seeking out their advice. There are even instances where the witan were legally able to depose a king so it was to his advantage to keep on their good side.

The example that first comes to my mind is the exile of King Egbert of Northumbria and Archbishop Wulfhere of York during the first few years of the Viking attacks in the 9th century. As I have already discussed this event in detail I will provide some other examples. In 942 the witan of york choose Olaf as king over them instead of the 18 year old king of England, Edmund. In fact the same witan are supposed to have then deposed king Olaf in 952 in favour of another viking, Eric bloodaxe. Even earlier than this in 774 ‘…the Northumbrians drove their king, Alchred, from York, and took Aethelred, the son of Moll, to be their lord…’ It didn’t happen very often but these examples show that a king was not immune from attack by his witan and the people.

Just as they were able to get rid of a king, the witan was also involved in crowning one. In the early Anglo-saxon era, kingship was not passed down from father to son. Cousins, uncles, bastard children – basically anyone with royal blood or married into the ruling family could be king, as long as they were approved by the witan members. In cases where kingship had been won by force of arms (especially by men not of royal birth), it was to their advantage even more so to be on side with the witan. They were the gatekeepers, as it were, so as long as they were willing to work with you, your reign was more likely to succeed.

In the later period, after the succession disputes between Aethelwold and Edward the Elder of Wessex, and then with Aethelstan who was arguably the first king of England (and may or may not have been involved with the deaths of his predecessors), the line of kingship was more hereditary. It became a given that the first born son of a king would be the heir (unless otherwise designated) and the approval of the witan at the heir’s coronation became more of a symbolic gesture. An example of this is the approval of Harold Godwinson as the next King of England in 1066. At this time there were many claimants to the throne and though it is reported that the childless Edward the Confessor named Harold as heir on his death bed, the issue of succession was still being debated. In this instance, even if Edward really had named Harold as heir, it was important for him to be acknowledged by the witan as well. They were the only ones that could provide his rule with legitimacy and deny the other claimants. Little good it did them. As you can now see, the witan were still being called on to advise their king and country, but with each successive ruler their powers waned until they were totally replaced by the norman’s own system of council and feudalism.

2 thoughts on “The Witan: Trying to keep kings in their place since 5th century AD”