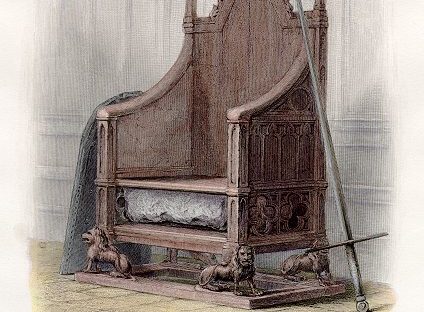 Concerning the history of Northumbria and its leaders from 867 until the end of the 9th century, the facts are a lot leaner when compared to previous Kings. From the death of King Aelle and Osbert until 875, the Anglo-Saxon Chronicle and the Chronicle of Florence of Worcester only go as far as saying that after York made peace, the Danes then went back and forth from Mercia, East Anglia and Northumbria for a few years creating havoc before they began their relentless assault on Wessex throughout 871. After establishing a peace of sorts with Alfred the Great, the Danes then travelled back north and forced King Burghred of Mercia into exile with his family in Rome before crossing the river Humber and plundering Northumbria in 875. Even at this point, once we are told that the Danes settle and farm Northumbria, there is no mention of who, if anyone, was in control in York during the interceding years.

We are left then, with the accounts of Simeon of Durham whose history of his homeland thankfully survives, as well as the Flores Historiarum by Roger of Wendover to fill in the gaps.

Both sources state that after the attack on York in 867, a man named Egbert was made King ‘…in subjection to the Danes.’ (Roger of Wendover). Simeon relates that Egbert wasn’t technically King at York but that he held ‘… jurisdiction to those only who resided upon the north of the river Tyne.’

Egbert’s reign, whether at York or north of the Tyne, lasted for six years while the Danes were harassing the other Anglo-Saxon Kingdoms. It came to an end when the people of York revolted against him and the Archbishop in 872 (which to my mind suggests that he may have held more power in York than Simeon suggests). Both men then fled their homeland and entered into exile in comfort at the court of King Burghred of Mercia.

The next year, when the Danes came back north and forced King Burghred and his family into exile in Rome, Egbert died. There is no explanation given for the cause of death either through illness, old age or by the hands of the Danes. However, it is tempting to suggest that his death came as a result of the Danes displeasure over his lack of control over York in their absence. Especially in light of the fact that the Danes had left a very weak Kingdom of Wessex en masse not long after the revolt and had Burghred exiled with no other apparent explanation.

After Egbert’s death, all of the sources I have used once more align. The second half of the Great Heathen Army which had stayed behind in Mercia with their leader Guthrum, continued to campaign against Mercia and Wessex. Halfdan and his half of the army settle Northumbria after a year of punishing its inhabitants and as some suggest, Halfdan was made King at York.

Simeon of Durham however, once again brings in new threads to the story, which is supported by Roger of Wendover. Somewhere between Egbert’s exile and the apparent Kingship of Halfdan, a King called Ricsige also ruled at York. His story will be examined in the next post.